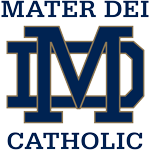 Mater Dei Catholic High School offers the most robust scholarship program for incoming 9th Graders based on the outcome of their High School Placement Test (HSPT). Students must take the HSPT on Mater Dei’s campus on January 22, 2022 to be eligible to receive this scholarship. This past year, 466 eight graders from San Diego and Imperial Counties battled the rain to get their shot at one of these scholarships. We are happy to congratulate these 29 HSPT Scholars from our Mater Dei Class of 2025!

The PRESIDENTIAL Scholarship covers 100% of tuition for 4 years and is valued at over $72,000! Limited to the top 10 Students who place in the 99th percentile nationally on the HSPT.

The PRINCIPAL Scholarship covers 75% of tuition for 4 years and is valued at over $56,000! Limited to the next 10 highest scoring students.

The MERIT Scholarship covers 50% of tuition for 4 years and is valued at over $36,000! Limited to the next 15 highest scoring students.

Minimum Requirement
Currently Enrolled at MDCHS
Awarded annually to a student/athlete(s) who exhibits a will to succeed and lead in academics, athletics, and citizenship. Someone who epitomizes the adage of “work hard and good things will happen!” This award is in honor of Bud & Ginny Milke, longtime supporters of St. Rose of Lima, Marian Catholic / Mater Dei Catholic High School.

Minimum Requirement
Freshman Currently Accepted at MDCHS
This scholarship is awarded to an incoming Freshman student who exemplifies excellence in Scholarship, Character, Leadership and Service, as well as financial need.
Note: The candidate must maintain or exceed a 3.75 GPA each year to continue to receive the annual tuition scholarship for each of the candidate’s 4 years.

***The selected Junior Scholar will be eligible to apply for the Dr. Estelle L. Kassebaum Memorial Scholarship in his/her Junior Year.

Awarded annually to a student who exemplifies camaraderie and friendship in the classroom, on the track and in the community.

Dallas Freitas, Class of 2015, was a Merit scholarship recipient at MDCHS, who also excelled in athletics, especially track, cross country, and pole vaulting. Dallas held the 200m record at MDCHS from 2015 to 2019. He is currently second overall. In 2015, Dallas was the Mesa League Runner-Up in the 200m and finished fifth at CIF Finals. He is also 8th overall in the 100m record. He was a four-year varsity track runner at Mater Dei. Dallas was on the 4×100 relay all four years and participated in the 100m and 200m sprints. Dallas’ personal records include running a 11.33 in the 100m, 22.41 in the 200m and jumping 9’0 in the pole vault event.

Dallas was also very involved in various aspects of student life, such as Ambassadors for Christ, Yearbook editor, Band (steel and regular drums) and the Drama Club. Among his many accolades, he was a gifted artist, talented cook, classical pianist, and a Rubik’s Cube Society enthusiast who was able to solve any cube presented to him. One of his endearing and witty interactions with his close friends was the “Cooking with Dallas” show. He was deeply introspective and naturally philosophical, with the ability to discuss any topic in a comprehensive way. Dallas had a love for travel, with Spain and Morocco being the most culturally diverse and exciting destinations he visited. Having a genuine care for humanity that was evident with his EMT state certification, proficiency in Braille and St. Vincent de Paul volunteering, Dallas offered sincere efforts to help those in need. His continuous encouragement helped many to believe in themselves and to manifest their dreams. He exemplified the Crusader spirit on and off the Mater Dei campus with his camaraderie, authenticity, grace, and approachability. Dallas was a great friend in every sense; and was loved and admired by all who knew him.

The First-Generation High School Student in the United States Scholarship honors the sacrifice parents make to give their children a better life in this country. The ideal recipient exemplifies positivity, resilience, drive, leadership, and kindness characteristics, in and out if the classroom.

This scholarship is awarded to an incoming Freshman student who has shown a positive impact in our community and has led peers by example. The candidate must exemplify Crusader School spirit. This award is in honor of Mario Fierro, Cathedral Catholic High School teacher, Coach and Uni Alum. Mr. Fierro was young, vibrant and a beloved educator, coach, and friend.

Note: The candidate must re-apply each year for the scholarship and meet eligibility requirements to continue to receive the annual tuition scholarship for each of the candidate’s 4 years.

Awarded annually to a student who strives to be a leader in his/her school and home community. Available for low-income families or families with large out of pocket medical expenses. Special consideration will be given to students who have lost a parent, a student who has a diagnosed learning disability and/or special need, and/or have a special needs or disabled parent/sibling.

Minimum Requirement
Students with at least one-year participation on Frosh, Junior Varsity or Varsity football team are eligible to apply.

The recipient of the Richard G. Balelo Memorial Scholarship epitomizes leadership, sacrifice and resilience in the classroom, the community and on the field.

Awarded annually to recognize and celebrate a student’s achievement in the theatre. This award is in memory of Mr. Kevin Brown, a longtime supporter of Marian/Mater Dei and the Arts.

Minimum Requirement
Currently accepted/enrolled student at MDCHS who have lost a parent.

Scholarship awarded to a student or students (accepted) who have experienced the death of a parent. The award is in honor of triplets, Tom, Jim, and Claire McNamara (born in 1932) who were blessed to have both parents along with their other eleven siblings, well into adulthood. It is also in the memory of Timothy J. Hilgeman, whose family is part of the Mater Dei community.